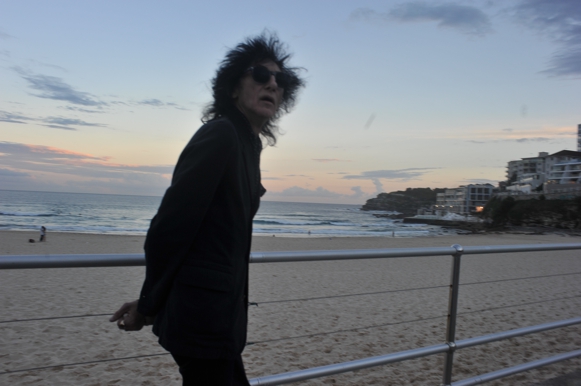 From his early days as a pep pill swallowing mod, John Cooper Clarke, Manchester’s legendary poet, performer, writer and comedian, has always looked good and lived well. He took the train down to London from Colchester, where he now lives with his wife and daughter, and we met him up at the Café Royal for an afternoon of chat and Vodka Martinis…

Vodka Martini One: Pictures are taken at the Café Royal.

CLARKE: The closer to ether a drink is, the better. One stage further and that would be a gas.

IDLER: So… what’s your relationship with idleness?

CLARKE: Me and idleness go way back. I’ve had a few jobs, but if you want to be a writer, you’re better off getting a job that doesn’t require that you do anything. There used to be a lot 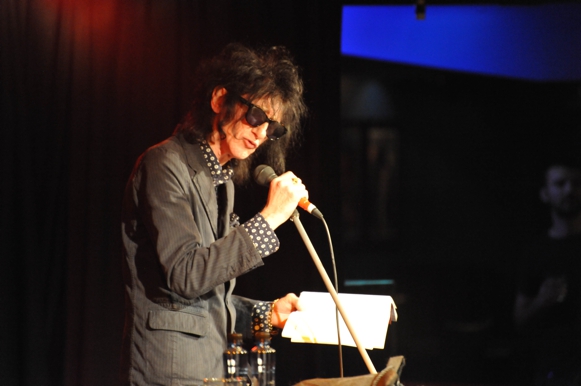 of these jobs around. The best one I had was as a firewatcher on Plymouth docks. I had to be there, but once I was there, there was nothing to do. It’s ideal because you’re not surrounded by distractions of your own choice. You’re doing the Graham Greene thing - you’re going in at nine and coming back at five and that’s a long time to write. Some of it’s good, some of it’s shite. It’s a lot easier to write under those circumstances than it is when you’re a completely free man. You can always find something better to do than writing when you’re at home.

IDLER: We’re interested in people who stick to their own path…

CLARKE: …and create that idle world, which is quite a job in itself. I wish I had a modus operandi for that, but sadly it’s an intuitive thing, instinctive. Idleness is the poet’s friend, but enforced idleness. A job that you have to go to, but not necessarily do anything.

IDLER: What other sort of jobs have you had?

CLARKE: My first job was as an apprentice motor mechanic, just after I left school in the mid-Sixties. Things get pathologised today, don’t they, but this was pre-patholigisation. Everyone in our class had an amphetamine habit, but we didn’t see it like that. All our mums had a prescription for amphetamines. They were called pep pills. They were an aid to modern life, they were a labour saving device. They weren’t looked upon as drugs. It was no big deal. When I got this job, I thought I’d better knock it on the head. I gave up the pep pills. Then I got peripheral hallucinations. I’d see a hedgehog running along the skirting board, then I’d do a double take and it wasn’t there at all. Little animals running up and down your shirt sleeves. So little things were pathologised, I didn’t equate the two.

IDLER: So what did you think it was?

CLARKE: I thought I was going mad. I went to the doctor’s. I’d only been working six weeks at the time. I said, “I can’t cope, doctor, y’know. What’s wrong with me?” I told him the symptoms - little animals running up and down my shirt sleeves; peripheral hallucinations of small furry or spikey creatures running along the skirting board, but upon further inspection they weren’t there at all. The doctor immediately says, “oh, you’ve been taking too many pep pills.” It shows you how attitudes have changed. It was a question of quantity - not, you shouldn’t take amphetamines, but, you’ve been taking too many. Anyway, he said, “you’d better take a couple of weeks off”, and he gave me some downers. He wrote me out a sick note and I wish I’d framed it. He handed me the sick note and there it was, “amphetamine psychosis”. I gave it to the foreman, Mr Jeffries. He looked at it and said, “amphetamine psychosis, eh. My wife had that. She were right poorly with it”. [laughter]

IDLER: That suggests there was much less moralising about that sort of thing.

CLARKE: It was just a question of quantity. Don’t get on a twelve step programme. People ask me how I stay thin. It’s a strict regime. It’s a combination of supervised fad diets and amphetamines. I took them all through the Sixties, but if you’d told me I w 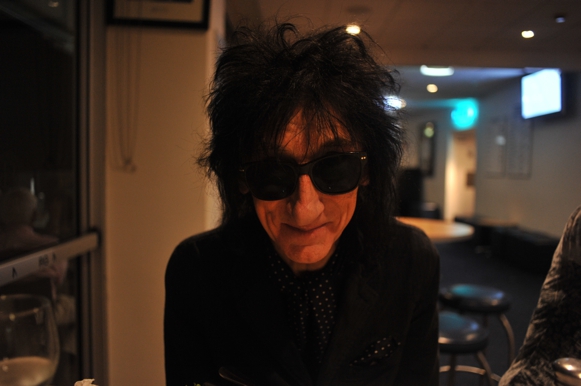 as a drug addict, I’d have laughed in your face. I think it’s the most harmless drug isn’t it? It’s a high achiever’s drug. Jean-Paul Sartre - you wouldn’t have any of that stuff. The whole of the second world war was run on amphetamines. The RAF, American air force alike. Without amphetamines we’d have been under the jackboot. We’d all have been on methadone - Hitler invented methadone. The opiate supply routes were cut off, and they had to invent an opiate substitute like, rapid style.

IDLER: What else did you get up to in the Sixties?

CLARKE: I was a mod - it’s the only youth cult I’ve ever actually been a whole hearted member of. The great thing about mod was that it was a very snobbish movement. We went to a club in Manchester called the Twisted Wheel - it was the mod club of the country. We used to get people from all over. It was the first place I heard soul music. You never heard any guitar music there - it was all Stax, Motown, Memphis Horns, Booker T and the MGs. Guitar solos not allowed. Strict dress codes, no guitars. At the Twisted Wheel, by 1965, you didn’t actually call yourself a mod any more. People in Burnley called themselves mods, people with targets on their parkas. We called ourselves “stylists” - and shoplifting was the big national sport of the stylists. You’d go to John Michael and pinch things - £80 sunglasses. It was a full time job. Food wasn’t high on the agenda, there was no hip food. You blew your wad on cloth, not even records.

IDLER: And when did you get into writing and performing?

CLARKE: In the mid Seventies. I was trying to get a career going as a nightclub performer.  I wasn’t particularly interested in progressive rock - and so for a while my social life suffered. Everybody lost it in the Seventies - except Frank Sinatra and Jack Lemmon. They were the two guys who looked okay, even in the Seventies. Everybody lost it. All that Denim. Awful bands like Barclay James Harvest. I already wrote poetry, and I thought maybe this could be put in a nightclub context and be funny. There was a thriving club circuit. I did manage to get a residency at this club called Mr Smith’s. They’d have Shirley Bassey, Matt Munro - top acts. I got £30 for a twenty minute set - that was an engineer’s wage. Then I met Howard Devoto and Pete Shelley. And punk didn’t look that outrageous to me. I slotted in - I was wearing three button suits with narrow skinny trousers, Skinny tie and Perry Como haircut. At the time it came across as quite unusual, because then middle management were wearing mustard coloured flares. Howard said, you should do some of these punk rock gigs, John. I’d heard the term but equated it more with the American side of things. He said come to the Free Trade Hall and play with the Sex Pistols. I did a couple of support slots for the Buzzcocks, and it got me out of Manchester, and then around the world. So, great, thanks Howard, thanks Pete. It was right place, right time, I looked right, my face fitted.

IDLER: You were never attracted by the hippy stuff?

CLARKE: Oh yeah, my first wife was the last of the flower children. She took acid every day of her life. I was on nodding acquaintance with it, I just didn’t like the clothes, but y’know, the free love, the drugs… OK, I’ll go along with it that far. But, you know, everyone judges by appearances. It’s a pity that people didn’t judge by appearances in 1936 Germany, then they’d have known Hitler was a cunt - ha ha.

IDLER: It was important for Baudelaire and that lot. 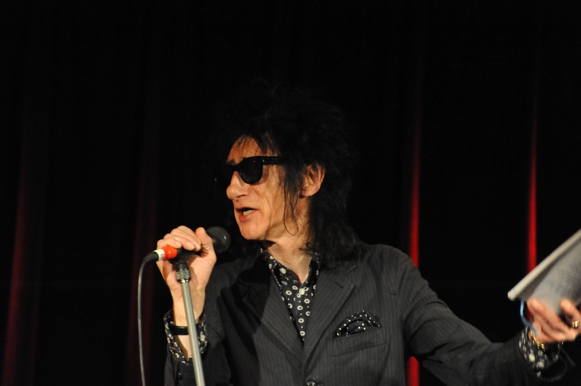 CLARKE: People are going to want to know, if someone looks good, what do they do. It’s important.

IDLER: In a way, the aristocratic ideal - not in the class sense - seems to be available to more people nowadays.

CLARKE: Yes, the aristocratic disdain for work. It’s the one legacy they’ve left that’s really worth something. But the aristocracy aren’t like that now. They’re always at great pains to point out the good works that they do. Which I think is a mistake, I think they should be more unapologetic about it.

CLARKE: People age better now than they used to. Marianne Faithfull looks fabulous. Some people can just do it.

IDLER: It gives the lie to the idea that people who have had a druggy or wild lifestyle age badly. If you become bitter and vain or bored, that might be more like ageing.

CLARKE: Baldness used to be the kiss of death as far as pulling was concerned. It was time to buy the mustard cardigan and the gardening supplies. You go bald now and it’s not the end of the world. It’s all down to role models. There are people who look like that who are cool people.
Copyright The Idler 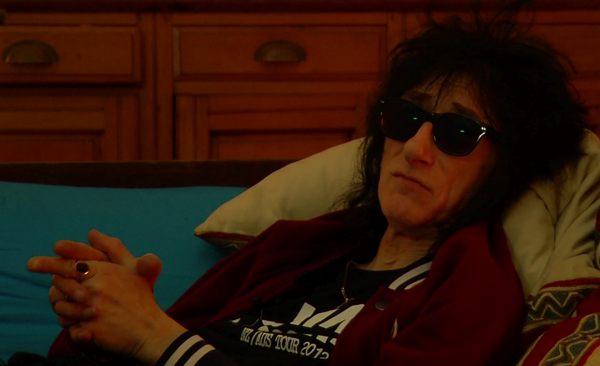